Over at Legal Insurrection, Professor Jacobson has his readers send in bumper stickers that they think are funny or which illustrate the current political environment.  This one, I think, perfectly shows the psychosis of the left.

On one hand, the driver of this car wants to make art, not war, yet in two other stickers he/she threatens violence to the users of cell phones, and insults people who drive SUVs using what most would consider fighting words.   Apparently, this twit is unaware of the contradiction in messaging, but that is perhaps characteristic of someone who still thinks they ought to vote for Obama. 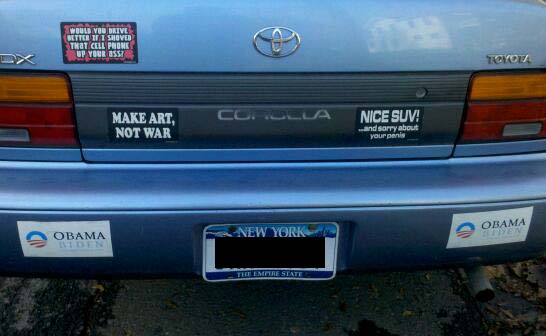