WWI, that's ONE, era German submarine, lost since 1915, located in 90 feet of water off the Norfolk, England coast

Whilst undertaking detailed seabed scanning for the development of windfarm projects in the East Anglia Zone, off the coast of Norfolk and Suffolk, windfarm developers ScottishPower Renewables (SPR) and Vattenfall uncovered something they weren’t expecting – an ‘uncharted’ wreck of a WWI German submarine, missing in action since 1915.

Andy Paine, Vattenfall project director of East Anglia Offshore Wind Farm comments: “Following the discovery the team reported its findings to the relevant authorities, including RoW (Receiver of Wreck) in the UK. The seabed scanning had been undertaken by Netherlands-owned company Fugro, and their team made us aware of the Dutch Navy’s hunt for its last remaining missing WWII submarine.
“We were all extremely keen to make contact with the Dutch Navy to see if this could be the submarine they have been looking for over so many years: could we at last have solved the mystery?”
The Royal Netherlands Navy was duly notified to investigate whether it was Dutch military submarine HNLMS O13, which went missing in action in June 1940, after the crew were tasked to patrol the waters between Denmark and Norway.

GoPro footage taken by the Dutch Navy divers highlighted clear images of the conning tower and deck lay-out, which suggested the wreck was of German origin. From German drawings it was identified that this was a WWI German submarine: Type U-31. A database of reference books shows that only U-boats U-31 and U-34 had been lost in this area of the North Sea. 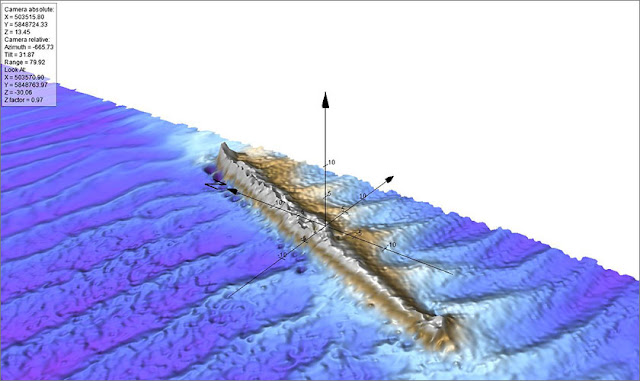 Three years after its initial discovery (in September 2012) the wreck was officially identified as German submarine, U-31, which left for patrol on 13 January 1915, never to return. The wreck is approximately 90km offshore in the North Sea but sits on the seabed at a depth of only 30 meters.
Mark Dunkley, marine archaeologist at Historic England adds: “SM U-31 was commissioned into the Imperial German Navy in September 1914. On 13th January 1915, the U-31 slipped its mooring and sailed north-west from Wilhelmshaven for a routine patrol and disappeared. It is thought that U-31 had struck a mine off England’s east coast and sank with the loss of its entire complement of 4 officers, 31 men.”
“U-31 was the first of eleven Type U-31 submarines built between 1912 and 1915. The class were considered very good high sea boats with good surface steering; 8 were sunk during operations while 3 surrendered and were scrapped after the war. Of those lost during operations, the whereabouts and fate of two, including U-31, was unknown.
“The discovery and identification of SM U-31 by ScottishPower Renewables and Vattenfall, lying some 91km east of Caister-on-Sea, Norfolk, is a significant achievement. After being on the seabed for over a century, the submarine appears to be in a remarkable condition with the conning tower present and the bows partially buried.
Hat tip: The History Blog