I've been watching this developing story for a while, but what happened today is a milestone that might herald a new era in space exploration and exploitation.

The private space flight company headed by Elon Musk has launched a resupply rocket to the International space station, and today that resupply module successfully docked at the station. 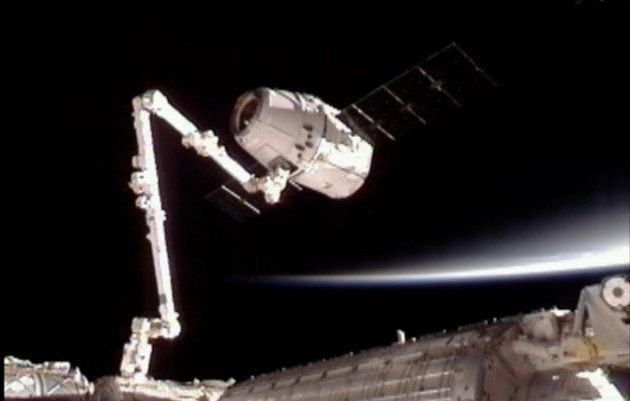 
"NASA astronaut Donald Pettit used the space station's 58-foot robot arm to snare the gleaming white Dragon after a few hours of extra checks and maneuvers. The two vessels came together while sailing above Australia.
"Looks like we've got us a dragon by the tail," Pettit announced from 250 miles up once he locked onto Dragon's docking mechanism.
NASA controllers applauded as their counterparts at SpaceX's control center in Hawthorne, Calif. — including Musk — lifted their arms in triumph and jumped out of their seats to exchange high fives. The two control rooms worked together, as equal partners, to pull off the feat."

Misson control in Hawthorne, California!  Maybe in spite of our idiot politicians, we are about to see a new high tech industry blossom in the formerly golden state.

Anyway, this might be it.  It might just be the point that private industry takes over from government in the exploration of the high frontier that is space.   It definitely deserves our close attention..
Posted by c w swanson at 12:19 PM