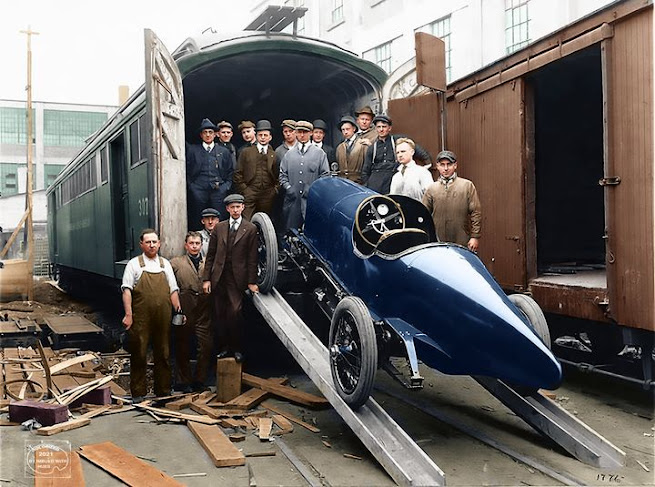 On its way! This is the first picture of the new Hudson Super-Six racing special which except for the body design and a few adjustments of the chassis, is practically a stock Super-Six. The Hudson people claim that the Super-Six stock card develops such enormous power that it was unnecessary to build a special racer to represent Hudson in racing, as a few changes and a special body would adapt the stock car for terrific speed efforts. The Hudson built five of these racers, all except one of the same type as this handsome flyer. The racer is being loaded into the specially equipped railway coach who will transport the Hudson fleet to all the big races this year. Grouped around the care are many of the Hudson team, including Arthur J. Hill, Manager, his lieutenant Billy Chandler, Ralph Kriplen and Jack Gable, reserve drivers who will replace Ralph Mulford or Ira Vail, the Hudson’s crack first wheel drivers, should it prove necessary.
Posted by c w swanson at 6:08 AM