After a 293 million mile (471 million km) journey aboard @NASAPersevere, the Mars chopper ended with the final drop of 4 inches (10 cm) from the rover's belly to the surface of Mars today. Next milestone? Survive the night,"

The red circle was added later by helpful Earthlings. 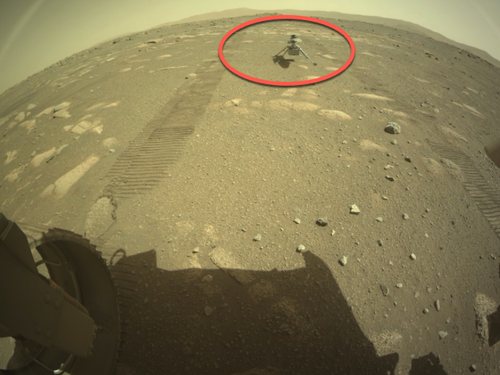 "This heater keeps the interior at about 45 degrees F through the bitter cold of the Martian night, where temperatures can drop to as low as -130 F (minus 90 degrees Celsius)," NASA's Bob Balaram, chief engineer for the Mars Helicopter project, wrote Friday. "That comfortably protects key components such as the battery and some of the sensitive electronics from harm at very cold temperatures."

The $85 million marscopter will be the first helicopter to fly on the Red Planet. Data from Ingenuity's first flight, expected to be on Apr. 11, will be received by NASA on Apr. 12. Ingenuity is embedded with multiple cameras that will soon allow it to observe Jezero Crater (where the Perseverance rover landed on Feb. 18). Each flight will be conducted over a 300-foot-long flight range at a maximum altitude of 16.5 feet. 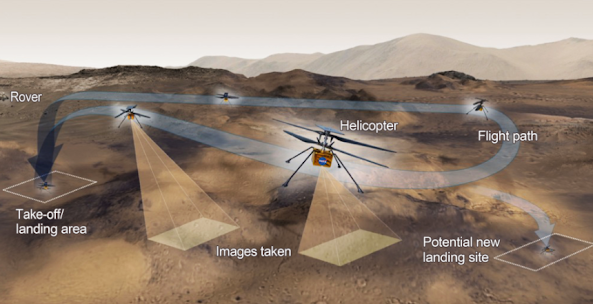 This will be especially interesting since the atmosphere on Mars is so thin it would qualify as a vacuum in a lab.  However, the gravity is also less than on Earth, which helps.  It's possible the contraption may not fly at all -- we'll see.

And finally, we have to remember to "Get to da choppah!"