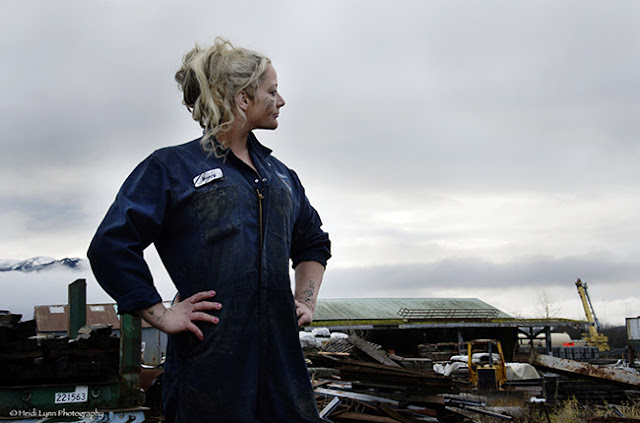 The first leg of her trip, to Ketchikan, landed just as a storm blew in. A tiny float plane had been booked to shuttle her to the island, but the small aircraft couldn’t fly safely in the whipping wind. Boyce, however, didn’t have the luxury of waiting for calmer weather.
“When you’re a field mechanic, you can never say ‘no,’” she said. “You figure it out.”
She would take a ferry instead. A mile from the dock, she started walking—in the pelting rain, lugging a turbo engine and almost 100 pounds of tools. Hours later when she got off the boat, in the tiny town of Craig, the first person she met introduced himself as “Two Stabs.” Mud oozed over her boots with each soggy step as she made her way to the logging camp.
Boyce spent nearly a week in Craig, fixing the excavator as well as a garbage truck, a diesel generator and a rock crusher. She worked around the clock, taking cat naps on the rubber tracks of the rock crusher when she didn’t have time to decamp to her hotel room.
“Probably at 10 different times on that trip, I felt like I would die,” she said.
She finished the repairs just in time to get home by her deadline. On her flight back to Juneau, Boyce didn’t notice that she was too tired to sit up straight. Instead, she reveled in the satisfaction that, thanks to her, an entire lumber company was back up and running. She was the hero.
She was also hooked.
“It has become my addiction to the job,” Boyce said of the feeling of heroism that follows a job well done.