In a boastful flex of military muscle at a time of increasing tensions, the Iranian army has provided a glimpse inside its new subterranean drone base.

The facility's specific location wasn't disclosed, but it's said to buried hundreds of meters underground somewhere in the Zagros Mountains, a nearly thousand-mile-long range spanning most of western Iran.

"Strategic UAV Base 313" was showcased in a Saturday report on Iran state television. The reporter was blindfolded during a 45-minute helicopter flight to the facility.

Ok, draw a circle at a 45 minute helicopter ride from the airport, and look for helicopter landing pads. 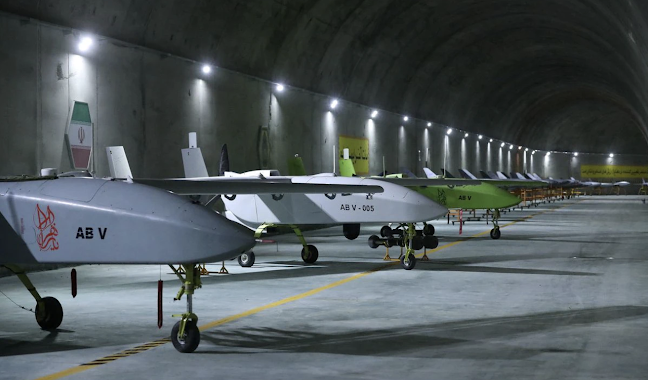 Of course, at some point the underground drones will have to go above ground to be useful.   As what one imagines must be large, heavy blast doors creak open, squealing for better lubrication, and the drones emerge to fly about on evil missions, sent thence by men wearing bedsheets for clothing, this "secret" base will be revealed.  One bunker buster to the opening, and all those pretty drones will be nicely buried.
Brilliant!
Posted by c w swanson at 6:44 AM