Now, if the Finns could just convince the Russians to give them back Karelia

Norway is considering giving a mountain peak to Finland as 100th birthday present.  Norway’s government has confirmed that for the centenary of Finland’s independence next year it is considering moving the border, gifting its Nordic neighbour a mountain peak that would be Finland’s highest point. “There are a few formal difficulties and I have not yet made my final decision,” the Norwegian prime minister, Erna Solberg, told NRK, the national broadcaster. “But we are looking into it.”

I wonder if the Finns will look away coyly and say, "Oh my, you shouldn't have.."

At 1,324 metres above sea level, the highest point in Finland currently lies on a bleak mountain spur known as Hálditšohkka, part of a far larger fell known as Halti, more than 200 miles inside the Arctic Circle.
Halti’s summit, at 1,365 metres high, is a kilometre away in Norway. But moving the border barely 40 metres further up the mountainside would put Hálditšohkka’s 1,331-metre summit in Finland – and make the country’s highest point seven metres higher.
The peak of Halti, just inside Norway.  Looks very Nordic, I hope that's not the summertime when the picture was taken. 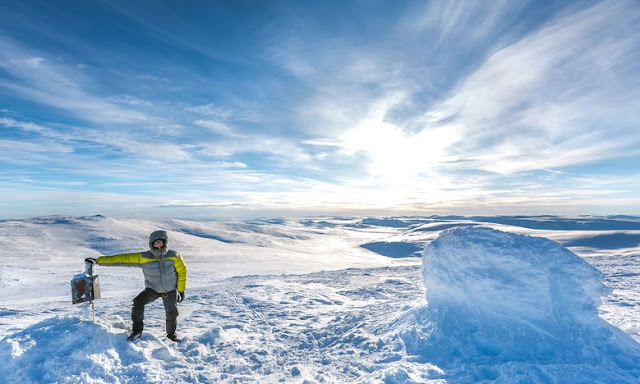 Public reaction has been overwhelmingly positive in both Norway and Finland, with the only objection so far coming from the indigenous Sami community, whose reindeer roam freely across the border and who argue that the land should belong to neither country.