Via the always good History Blog, we learn that archaeologists excavating the Hohle Fels Cave in the Swabian Jura of southwestern Germany have discovered a 40,000-year-old tool used to make rope. The piece was unearthed in August of last year by an international team led by Prof. Nicholas Conard of the University of Tübingen. Carved from mammoth ivory, the object is eight inches long and the wider side is dotted with four holes 7-9 millimeters in diameter. The holes are incised with deep spirals which are not decorative, but practical features that help thread plant fibers into strong rope. 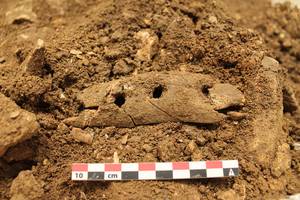 Excavators found the rope-making tool in archaeological horizon Va near the base of the Aurignacian deposits of the site. Like the famous female figurines and the flutes recovered from the Hohle Fels, the rope-making tool dates to about 40,000 years ago, the time when modern humans arrived in Europe.  I for one would like to see more information as to how they think they have accurately dated this for so long ago, but ten thousand years ago, or forty, it is still a startling find.

The pieces assembled together.

The spiral carving was made to guide the plant fibers through the tool. Rope or string prints have been found before in Paleolithic clay and there are some depictions of ropes in artwork from this period, but next to nothing is known about the process by which the first anatomically modern humans in Europe produced rope. 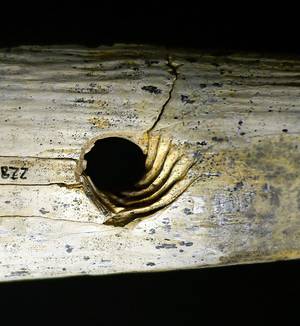 Swabians demonstrating how the tool was used to make rope.  Works quite well.  There is a YouTube video, but the Swabians don't get the internet and have actively prevented its embedding.  You can nevertheless see it here. 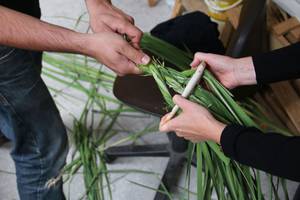 This innovative tool demonstrates, I believe, how truly modern humans were even 40k years ago. This is a sophisticated device that required quite a bit of thought and planning to build and use.  I imagine it is the product of a lot of trial and error by many people over many years, likely named something like "Thag" or "Grond."