The other day the 14 year old and I were driving past the local stripmall when we spied this display of old timers in the parking lot. Naturally, we had to stop and gawk. 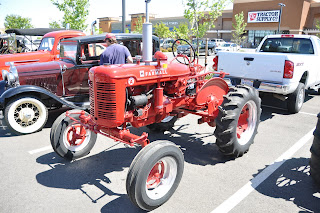 My Granddad drove an old Ford like this red one, only his was black. Maybe this is the same one only repainted! 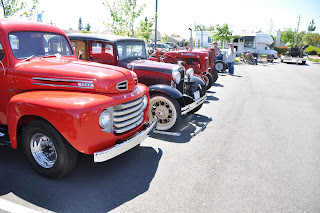 Here is the 14 year old in front of a Mack truck, built when Mack trucks were real .... well, Mack trucks. This one was in fact running (you can see a small pool of truck juice under the motor) and it was a chain drive! That's as in sprocket and chain, just like a bicycle. In fact, if you look closely, you can see the chain hanging down next to the back tires. This thing probably had a maximum speed of about 35 mph. You can see the crank on the front bumper, which for those who have never seen one was the way you started the motor. Grab on and spin it!
Once I started a tractor like that while it was in gear, unbeknownst to me, and it jumped at me as soon as the engine began to run. Nothing like a frantic leap to the side and then a dive for the clutch, as it was headed straight for my car. Good thing it was first gear!
And that item hanging from the back of the cab with the three yellow ovals, that is the turn signal, which was operated by pulling a line in the cab. It is used just like hand signals. Straight out would be a left turn, while up meant a right turn. Just plain cool. 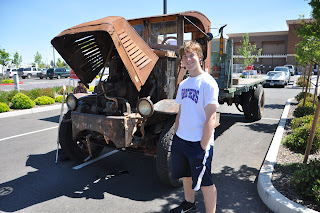