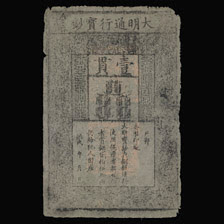 Above is a paper banknote from the Ming Dynasty of China, perhaps the first use of paper money.

Here is the story behind it, and notice how the more things change, the more they stay the same. Take notice, Ben Bernanke.

Chinese Ming banknote, China, AD 1375
After seizing power from the Mongol rulers of China in 1368, the rulers of the Ming dynasty tried to reinstate bronze coins. However, there was not enough metal available for this, and paper money, made of mulberry bark, was produced.
These banknotes continued to be issued by the Board of Revenue throughout the Ming dynasty, but inflation quickly eroded their value. The effect of inflation was so devastating that state-issued banknotes were regarded with suspicion for many years.
It was not until the 1850s that a Chinese emperor dared to issue banknotes again.
The Chinese writing along the top of this note reads (from right to left): ‘Da Ming tong xing bao chao’ and translates as Great Ming Circulating Treasure Note’. Below this, the denomination is written in two characters ‘yi guan’ (one string) above a picture of a string of 1000 bronze coins, arranged in ten groups of 100 coins.
The long inscription beneath gives instructions for use and a warning that forgers will be punished severely. Dragons, symbolic of the emperor, fill the patterned border.
The date on Ming dynasty banknotes usually refers to the Hongwu reign period (1368-1398) of the first emperor of the Ming dynasty, Zhu Yuanzhang (also known as Ming Taizu). A national hero, he had risen from a peasant background to lead a successful rebellion against the Mongols, and establish the new Ming dynasty.