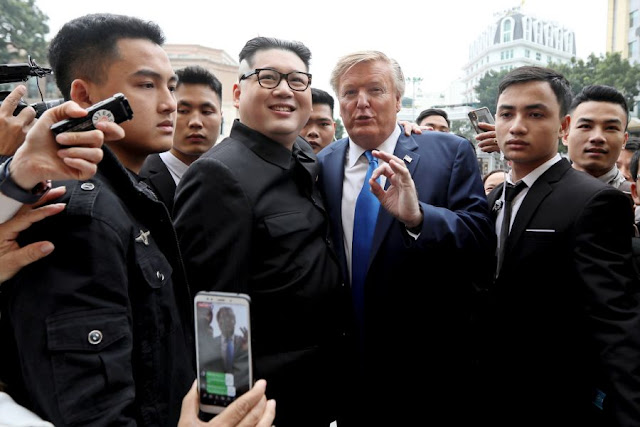 Come on, you guys, lighten up and have some fun.  Those two really do look like Trump and Kim.

Vietnamese authorities are not amused by the antics of two impersonators of North Korean leader Kim Jong Un and President Donald Trump.
The duo has been making rounds of Hanoi, taking pictures with curious onlookers ahead of the second summit of the two leaders next week.
However, on late Friday, a Kim lookalike, the Hong Kong-based impersonator who uses the name Howard X, posted on Facebook that about 15 police or immigration officers demanded a mandatory "interview" with them following a talk they gave at the state-run VTC station.
"They then said that this was a very sensitive time in the city due to the Trump/Kim summit and that our impersonation was causing a 'disturbance' and ... suggested that we do not do the impersonation in public for the duration of our stay as these presidents have many enemies and that it was for our own safety."
According to Howard X, there was a back-and-forth with an unnamed Vietnamese officer who "did not seem pleased with my answer" and threatened the impersonators with deportation, saying they were breaking immigration rules.

The real Trump and Kim should get together with these two, and have a mix and match contest.  Could be great publicity.