A quasar named 3C 273 is four trillion times brighter than the sun. it would have about the same brightness in the sky as our sun at a distance of ~33 light years. this one quasar emits approximately as much light as the entire milky way galaxy combined x100.

Here it is below photographed by the Hubble Telescope. 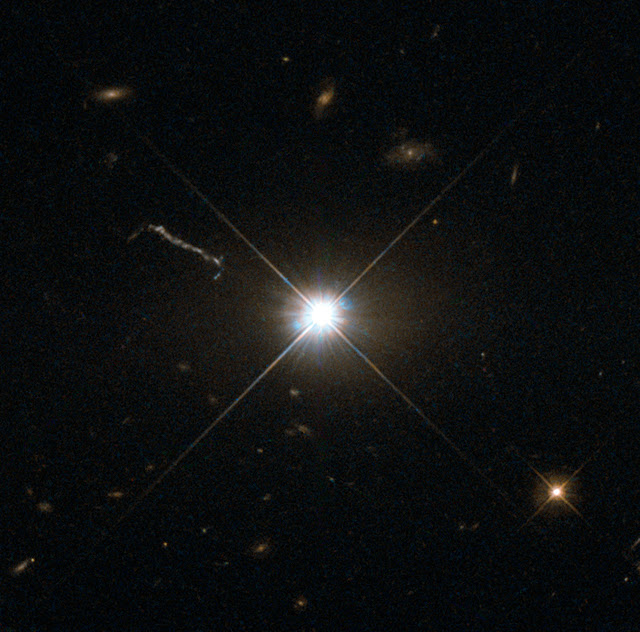 Quasars are formed when enormous amounts of gas orbit a supermassive black hole. The intense gravity of the black hole makes the gas orbit at insane speeds. And the gas becomes incredibly hot as a result. And because of the size of supermassive black holes, the superheated gascloud is larger than our whole solar system.
The orbiting gas also creates incredibly powerful jets of radiation that shoot out from the poles of the black hole's event horizon. The exact mechanism that causes this is still not known, but if the jets are pointed in our direction the quasars will appear even brighter.
Gravity is so huge around a black hole that it creates different orbiting speeds in the disk of gas orbiting it (because of the fact that the importance of distance is magnified in gravity's formula). The result of this is an incredible amount of particle collisions and therefore very high temperatures.
Any planets within ~33 light years of this quasar would be eternally as bright as daytime on Earth. They would also be bathed in powerful X-rays given off by the Quasar. It would not be possible to live there.