Via Donald Sensing, below is a model of what the red planet, Mars, would look like if it had an atmosphere and oceans, just like Earth.

Kevin Gill, a software engineer, crafted some software to give an idea of what such an environment might be like.  Perhaps one of these days our technological prowess will advance to the point where we can do some terraforming on a planetary scale, and Mars would seem to be the ideal candidate.  Imagine water and atmosphere producing engines placed intermittently over the surface, and running for maybe fifty years non stop.   Eventually, enough water would be produced to build a sea, then an atmosphere, and at that point, you just might have something like what you see below.  Add some fish and imagine the sport!

Gill modeled the Mars terrain in an open-source learning program of his own creation, jDem846, and then set a sea level beneath which everything appeared flat and blue. Then, he brought that model into GIMP, where he painted features into the land based on NASA's Blue Marble: Next Generation imagery. He decided -- not all too scientifically, he admits -- which places seemed like they would be verdant, and which would be deserts. "For example," he explains, "I didn't see much green taking hold within the area of Olympus Mons and the surrounding volcanoes, both due to the volcanic activity and the proximity to the equator (thus a more tropical climate). For these desert-like areas I mostly used textures taken from the Sahara in Africa and some of Australia. Likewise, as the terrain gets higher or lower in latitude I added darker flora along with tundra and glacial ice. These northern and southern areas textures are largely taken from around northern Russia. Tropical and subtropical greens were based on the rainforests of South America and Africa."
Lastly, he brought the image back into jDem846 where he rendered it as a sphere and added clouds and tweaked the lighting. "This wasn't intended as an exhaustive scientific scenario," he writes, "as I'm sure (and expect) some of my assumptions will prove incorrect. I'm hoping at least to trigger the imagination, so please enjoy!" 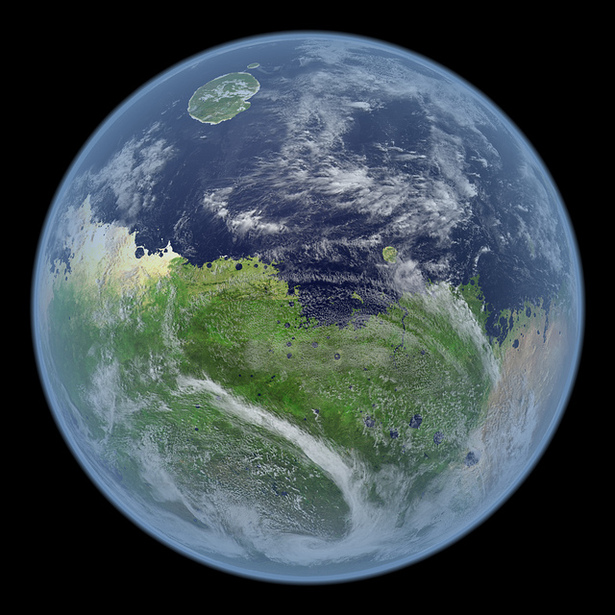