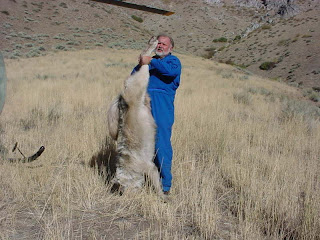 The man in blue is over six feet tall. The picture was taken in the Owyhee area of Oregon/Idaho. Next, at the link is the story of a possible wolf attack in Alaska. These animals aren't like Fido. If you are going into country where these animal live, prepare accordingly.
www.adn.com/2010/03/09/1175725/wolf-blamed-in-death-of-villager.html
Update: Confirmed, it was indeed wolves. Too bad she didn't simply carry a sidearm, that would have prevented this, but that isn't what someone from Pennsylvania thinks about when they go running in Alaska.
www.adn.com/2010/03/11/1179489/troopers-release-statement-today.html
Posted by c w swanson at 9:37 PM