They weren't even recognized by science until they were photographed from the space shuttle in 1989, but now the odd phenomenon of red sprites are being photographed by amateur photographers. There is even a website for them.
Forming above large thunderstorms, at the edge of space, their genesis is poorly understood.  They occur most often in bunches, at about 80km high, when a strong lightning bolt draws a charge from a cloud near the earths surface. Electric fields then shoot to the top of the earths atmosphere, and the result is a sprite.
Here below are some fine captures from backyard sprite hunters. 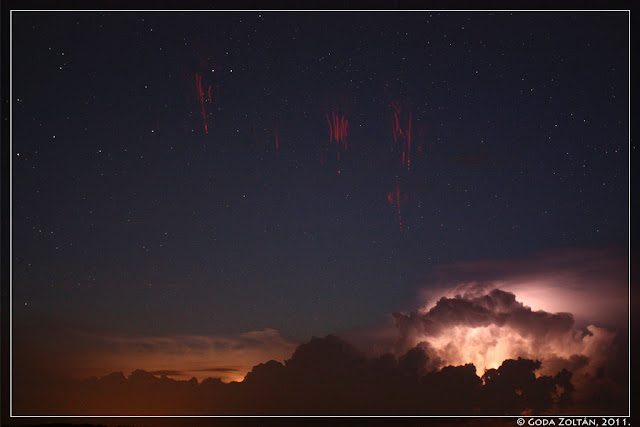 Here is a handy chart to show how to watch for a sprite.  I must say that armed with this knowledge, I plan to keep my eyes open the next time a thunderstorm marches across the valley.  I'll have the camera battery charged, the ISO setting high, and the remote shutter release primed and ready.  Hopefully I can capture such a crazy sight myself.
Posted by c w swanson at 9:17 PM