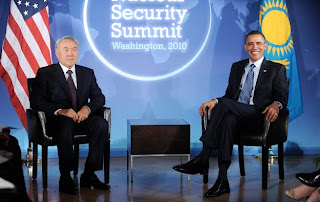 Obama claims he has taken historic steps to improve America's democracy during his time in office. Really? What would those be?
Its interesting as well that he made the comments while meeting with the "President" of Kazakistan, one of the more repressive regimes in central Asia. Somehow it seems both inappropriate and appropriate at the same time that he did this. Does it mean he aspires to the same sort of dictatorial powers, or is he simply engaging in delusional statements consistent with his severe narcissism?
thecable.foreignpolicy.com/posts/2010/04/11/obama_were_still_working_on_our_democracy
Posted by c w swanson at 9:30 AM